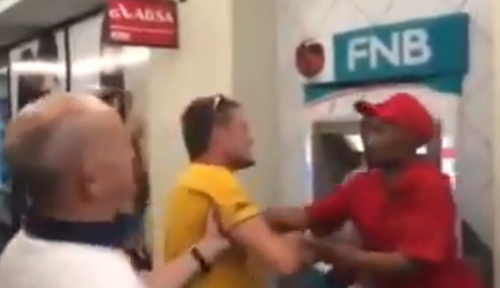 Amatuer video captured near an ATM at the Cape Quarter in Cape Town shows a heated argument between two guys and it ended with one of them getting kicked unconscious. According to SA Daily News the incident occured after ‘The White guys were taking too long at the ATM, and when asked to hurry, they replied saying: ‘you dirty black kaffirs……..’”.

The video ends with the white guy being pinned down and getting kicked in the head.

WARNING – not for sensitive viewers.

Harsh, but did he deserve it?

UPDATE: from an eyewitness who says she was there and saw what happened before and after the incident.

“I wish this video showed the full context. I was there. Not only were these 2 “men” racist before they started with the K word they were offensive to the women in the queue as well. The name calling went on for about 3-5minutes before this guy actually got physical with him. This altercation and screaming started simply because we asked them to hurry up after waiting 6 minutes while they fumbled to draw money in their drunken state. Also post this the security guard helped this guy up and a few minutes later we watched him scream at the very same security guard saying he was useless and worthless and probably only earns R4000 per month. I do not condone violence but I was very close to punching this guy in the face myself.”

“2 more security guards came to help but they both got verbally abused by the same guy they were assisting.”