A senior director and PR executive for a major media company in the USA is at the centre of a massive Twitter backlash after posting a racist tweet yesterday. Justine Sacco’s tweet about AIDS, Africa and her being white has resulted in social media outrage and get this…she is currently on a plane to South Africa and i stand under correction, but apparently she is headed to Cape Town and her plane lands this morning. Another source says she will land at OR Tambo airport at 7am.

Sacco is the senior director of corporate communications at InterActiveCorp, the company which owns Vimeo, The Daily Beast, OkCupid, Match.com etc. and this is the tweet causing all the outrage. 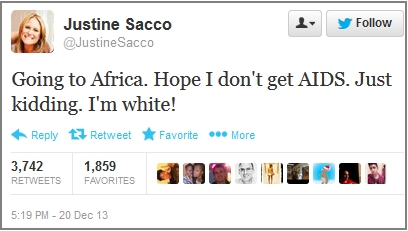 Oh i would love to be there at the moment when she lands and switches on her mobile phone.

Barring the fact that her account could have been hacked and given that she is a PR executive, this is possibly the worst PR fail of the year.

A representative from IAC released the following:

“This is an outrageous, offensive comment that does not reflect the views and values of IAC.  Unfortunately, the employee in question is unreachable on an international flight, but this is a very serious matter and we are taking appropriate action.”

And here’s a snapshot of how local Twitter users feel about Justine. 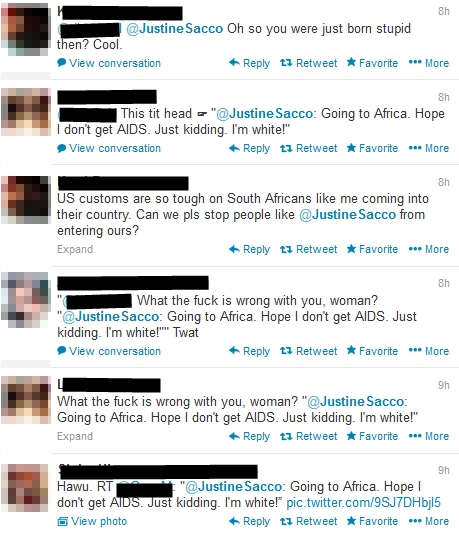 Balls deep in a sh*tstorm.

Unconfirmed that she is landing in Cape Town around 9am but will keep you updated.

UPDATE 1: the racist tweet has been deleted. So either she has landed and checked her phone or someone elses deleted it for her. Lets go with the former shall we.

UPDATE 3: she has landed in Cape Town 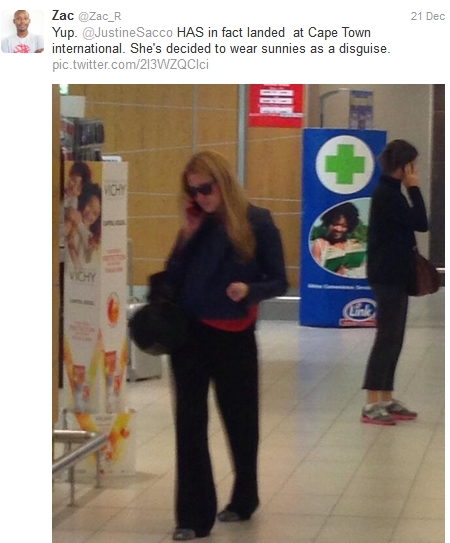 UPDATE 4: she has been fired from her job.

“The offensive comment does not reflect the views and values of IAC,” a company spokesperson told Mashable on Saturday. “We take this issue very seriously, and we have parted ways with the employee in question.”

“Words cannot express how sorry I am, and how necessary it is for me to apologize to the people of South Africa, who I have offended due to a needless and careless tweet,” she wrote.

“For being insensitive to (the AIDS) crisis — which does not discriminate by race, gender or sexual orientation, but which terrifies us all uniformly — and to the millions of people living with the virus, I am ashamed.
“This is my father’s country, and I was born here. I cherish my ties to South Africa and my frequent visits, but I am in anguish knowing that my remarks have caused pain to so many people here; my family, friends and fellow South Africans. I am very sorry for the pain I caused,” she said.” [eNCA]