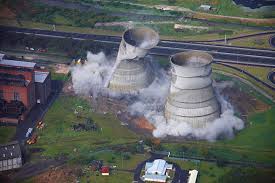 I use to drive past the now imploded Athlone Cooling Towers in Cape Town all the time back when i was a kid. Good times.

If you don’t know what they are or are not from Cape Town then just move along because i’m not gonna explain. It’s a local thing, but feel free to take a look at these first pics of the towers imploding.

Here’s the before picture with Table Mountain looking sessy in the background there.

And here is sh*t being blown up.

See i was gonna post a whole bunch of pics from the live feed at Zoopy.com, but it was monster f**k up. The servers apparently couldn’t cope so the feed was down. Then the city of Cape Town decided it was fun to piss on everyones parade and detonated the explosion 4 minutes early resulting in everyone being caught by surprise..including eTV who cut to the “live” demolition after it was done. Classic reaction on the broadcasters face.